Contact us
For details on booking
for your dining experience/table

A heritage of Scottish fish and seafood at Cannonball

Our building, Cannonball House, is built on foundations of oysters shells! The fast food of the artisan skilled tradesman who built this fabulous 4 story building originally in the 1600’s. 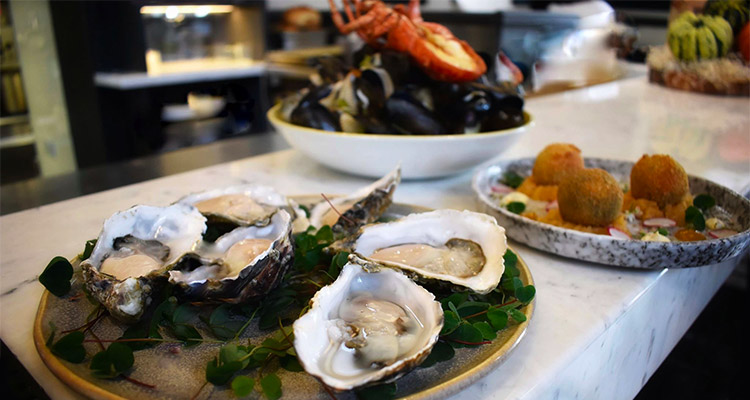 Giving us to taste the best in season and giving nature the best opportunity to regenerate and be sustainable for future generations.

Brought up on lobster and mussels

Scotland has the best seafood in the world. My father Johnny Di Ciacca always said that because our waters are crisp and cold and the lobsters, crabs and crayfish have to fight harder so they taste better. I think he was right.

Beside the seaside…
Living beside the sea, well it was on the shores of the Firth of Forth, brought huge respect for nature. The winds and the tides could change the course of your promenade on gale force day but in the summer with beautiful clear blue seas and skies, there really isn’t anywhere that beats the East Coast of Scotland and the fabulous shellfish and fresh fish that the sea gives you.

The fishermen that my family grew up with from the 1920s to the 1990s would all be fans of haddock. Mussels were rarely eaten by the locals and anything as exotic as lobster or langoustine would be thrown back or sold abroad. No wonder today it is such a valuable industry. The shellfish industry alone is valued at £9.8 million with farmed mussels alone valued at £8.4 million annually.

Farmed salmon is in a league of its own it values of over £500 million per annum in exports.

As the only Italian (and probably one of the few foreigners) in the village at the turn of the last century we were always are beneficiaries of any of these exotic lobster, mussels and what we call prawns. We were brought up on all varieties of fresh fish even sprats, those tiny little anchovy tasting fish that are great deep fried and enjoyed whole. 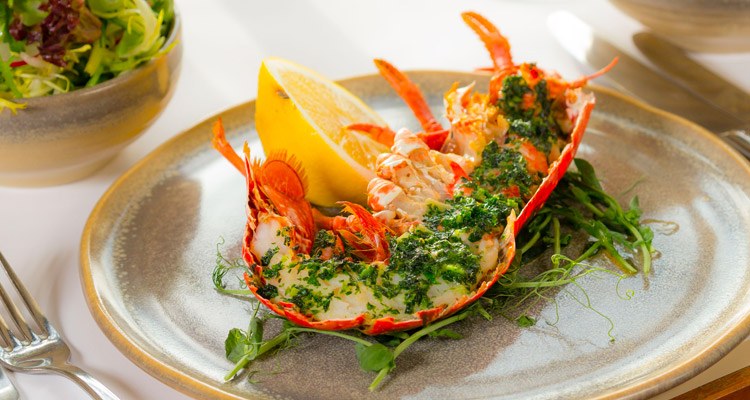 If you’re looking for something more filling our Lobster thermidor Macaroni Cheese is now a classic. Not to be missed either for lunch to keep you going, after all, that sightseeing or for a romantic dinner in what is one of the city’s most beautiful rooms.

“I’m more of a lobster lady than an oyster addict. I was brought up in Cockenzie which is a tiny fishing village with a beautiful harbour that neighbours a slightly larger village Port Seton with an even more beautiful harbour just 10 miles from Edinburgh.”

Where does our Lobster come from?
We serve our fabulous East Coast Lobster supplied by Belhaven Smokehouse just half an hour down the coast at Dunbar. Enjoy grilled with garlic butter or Thermidor.

Reviews for our lobster

"It was honestly the best lobster we have ever had"

"I wanted to sample Scotland lobster"

"Great dinner - loved the lobster with tarragon butter which is their house speciality. Lovely scallop appetizer."

"Would recommend the lobster thermidor Mac and cheese."

"I highly recommend the smoked salmon starter and the lobster thermidor macaroni cheese."

Loch Fyne Oysters are such a treat! 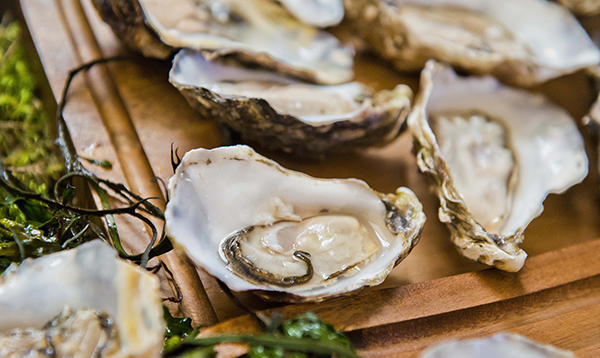 Oysters used to be sold by street vendors as a staple of the Scottish diet in those early years. Now they are a treat for us and we’re delighted to share a selection of the best varieties on offer from around Scotland depending what’s best in season, Loch Fyne Oysters are one of my favourites!

How to serve oysters
If you’re going to enjoy oysters with us we let you choose if you want them au natural (raw), which we shuck to order, or grilled, Kilpatrick.

If you are having them raw we serve either completely natural or you can squeeze some fresh Amalfi lemon, which we import directly from Italy, with a shallot vinaigrette which is the traditional French serving.

Where we buy our oysters
Regarded as one of if not the best oyster suppliers in Scotland the Loch Fyne Oyster Company do what they say, grow oysters on Loch Fyne.

They pride themselves on delivering the best in authentic Scottish seafood, whilst minimising the environmental impact. They are as much about community as business.

But we buy whatever is best in season so it may by Loch Fyne or Cumbrae that’s on offer. The team will be able to share when you come to the bar and enjoy a glass of chilled Scottish lager from Paolozzi’s Edinburgh Beer Company or a wee gram of Glengoyne works just as well.

Reviews for our oysters

"The fresh oysters were delicious and super fresh."

"We don't eat meat, but we love seafood. We had oysters, very fresh and tasty, with wonderful sauce"

"The oysters were such a stand out!"

"The oysters were fabulous!" 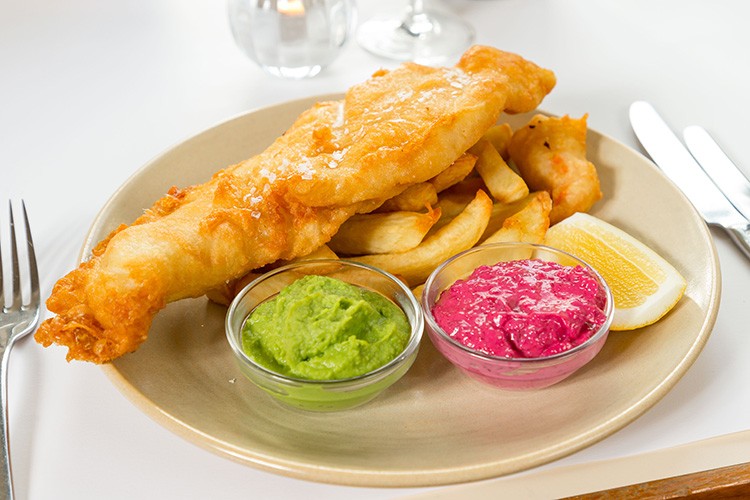 Our Posh Fish and Chips have the best, freshest, haddock with a tempura battered langoustine served alongside our hand cut chips, beetroot tartare sauce and minted peas. A real treat.

Where does it come from?
Belhaven Smokehouse is situated on the edge of the John Muir Country Park, just outside Dunbar. It’s only a 40-minute drive down the East Coast motorway.

Any other specials of fresh cod, hake or lemon sole always come from this lovely family.

Reviews for our Fish & Chips

"The haddock was delicately coated in a light batter, which was delicious and not a speck of grease on the plate."

"Between our group we enjoyed the posh fish and chips, pork belly main and the scallops starter and all were deemed delicious."

"I couldn’t say no the fish and chips. A good portion size, and lovely fresh, crispy batter, it was exactly what I needed!"

"The fish and chips were amazing"

"We had scallops on roasted cauliflower puree and fish and chips, big portion, perfectly cooked."

"The fish was cooked perfectly"

"The cod was beautifully cooked" 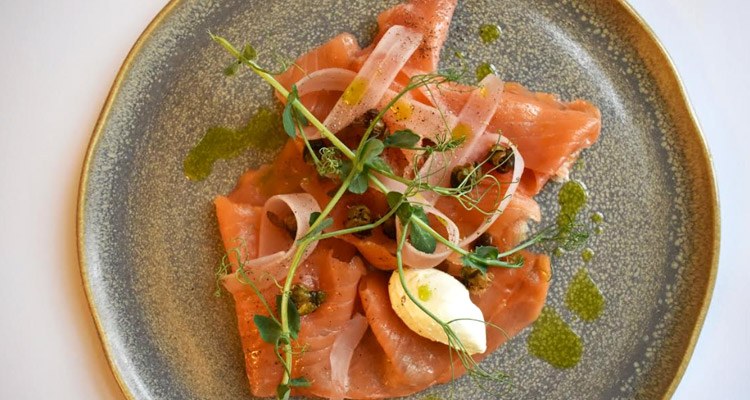 But you can’t come to Cannonball without tasting our smoked salmon. Smoked for us by Dicksons of Cockenzie. Our dear friends the Dickson family have been great friends of my parents and grandparents.

This oak smoked, hand sliced salmon that is searched from Shetland is smoked in the families smokehouse 100 yards from the harbour in Cockenzie. It’s world class and we know you’ll love it as much as we do.

Hand cut so it’s slightly thicker than most others. This is our family favourite and although it’s slightly more expensive than the other choice on the menu it’s worth every penny.

Reviews for our Salmon

"Starter of salmon was my highlight - fresh and beautiful to taste and look at."

"The salmon was to die for; the oysters served with scotch were extremely pleasantly surprising"

"Best smoked salmon I've ever had"

"The quality of the salmon was top and the taste was amazing."

"The smoked salmon was probably the best I ever had!" 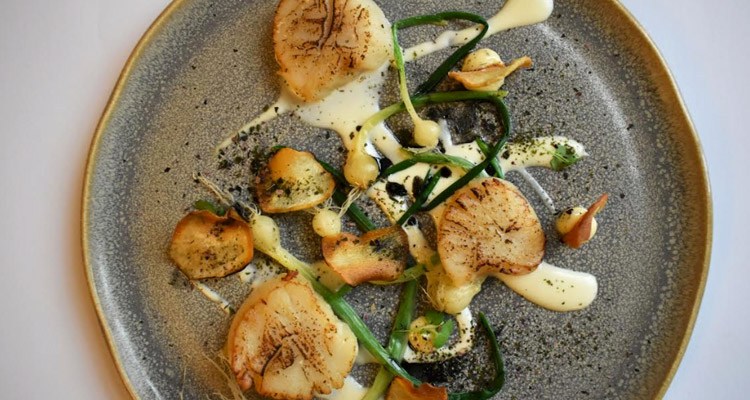 Isle of Mull scallops from Guy Grieves are also available. Hand dived and prepared just for you. Scotland at its best and at its freshest.

Guy Grieves Ethical Shellfish Company on the Isle of Mull is regarded as the best sustainable scallops in Scotland.

Hand dived, regardless of the weather, and dredging, pro-ethical environmental choices they are the scallops to enjoy when you’re visiting Scotland.

Reviews for our Scallops

"The scallops were also another big hit"

"The scallops starter was delicious." 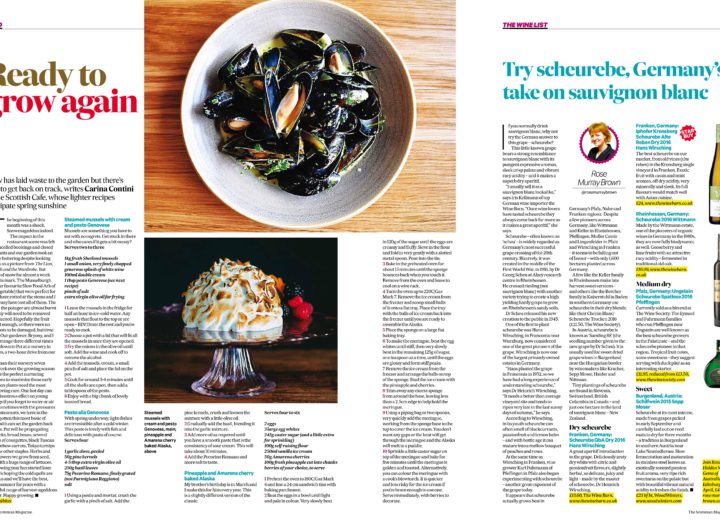 Published in the Scotsman Saturday 17th March 2018 Life is full of surprises.  You think the first day of Spring is upon us and the snow arrives by the meter.  The beginning of this mouth was more than just a surprise it was a shock. Snowmageddon indeed. The impact in the restaurant was felt with… 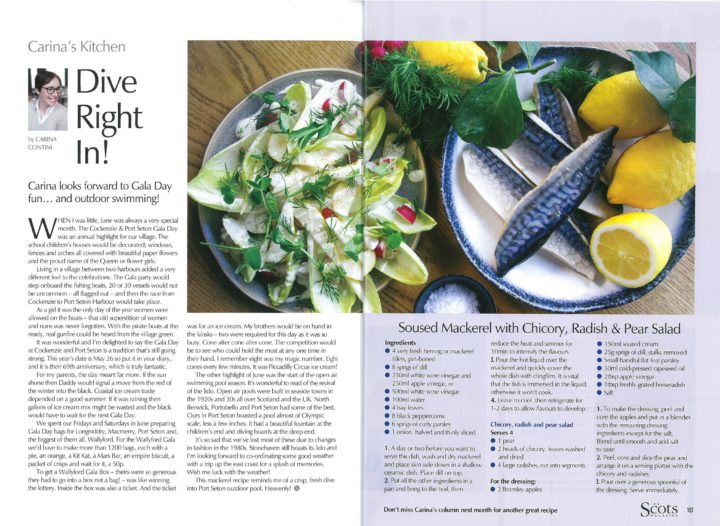 A sneaky preview of of Carina’s June 2018 article! When I was little June was always a very special month.  The Cockenzie & Port Seton Gala day for one was an annual highlight of our village. The school children’s houses would be decorated,  windows, fences and arches all covered with beautiful paper flowers and the… 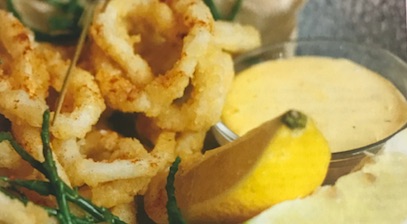 Carina writes a monthly column each month for Scots Magazine, a monthly publication packed with entertaining and informative features on Scotland’s people, places, culture and leisure. Every issue is a celebration of Scotland’s rich urban and rural life – from the great outdoors to the vibrant city scene; all complimented by stunning photography. Read more…

When we say award winning restaurant, we really mean it

We are very proud of our restaurants and delighted when they are noticed and praised! We are always trying to improve your dining experience. Here are some of the awards for Cannonball Restaurant…

Our awards in detail