Contini Edinburgh // About // Blog // Would you be embarrassed to ask a restaurant for a doggy bag? 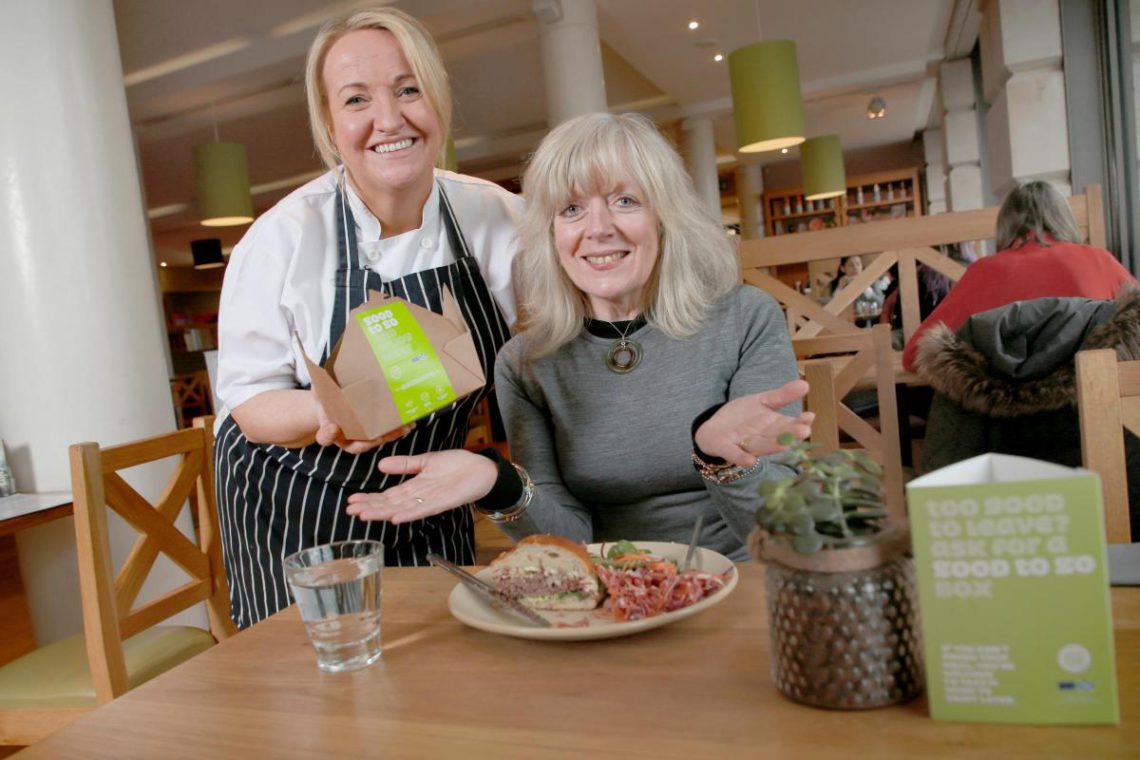 Would you be embarrassed to ask a restaurant for a doggy bag?

Delighted to be featured in Cate Devine’s Herald piece about food waste and doggy bags.

ARE you still too embarrassed to ask a restaurant for a doggy bag? You are not alone: almost half of Scots are. Now a new campaign is out to convince this silent minority that it’s out of touch with the zeitgeist, and that it’s cool to ask – if not quite sit up and beg – for our uneaten food to be boxed up so we can eat it at home.

Zero Waste Scotland, which conducted the research, says our reticence means the equivalent of one in six meals are thrown away, costing the Scottish hospitality industry £64 million a year – a figure described last week as “staggering” by Rosanna Cunningham, Cabinet Secretary for Environment, Climate Change and Land Reform.

ZWS is calling on all Scottish businesses to pro-actively offer its new-style doggy bags – reinvented as recyclable cardboard “Good to Go” boxes – as standard, in an effort to affect change consumer behaviour and save businesses money.

Good to Go was launched after an eight-week pilot scheme in 2014 to estimate the impact of a formal take-home service on restaurant food waste. Some 16 restaurants in Glasgow and Edinburgh took part, gave out 1400 take-away boxes, and saw a 42% reduction in plate waste: encouraging ZWS to say it was a “catalyst for change.” Many have continued the practice and some 268 Scottish establishments are currently taking part. But many more are needed to help meet the Scottish government’s target of reducing food waste by 33% by 2025.

It’s estimated that 395 tonnes of Scottish restaurant plate waste could potentially be diverted from recycling or landfill if the scheme were to be taken up by nationwide. “In addition,” said Ylva Haglund of Zero Waste Scotland, “it has the potential to change consumer behaviour and help them see that taking food home can be socially acceptable.”

What makes this latest push different is that each box contains food safety advice to reassure both restaurants and diners that it’s perfectly legal to offer and accept food to take home. That lack of clarity has been a hurdle for many.

Two-fifths (42%) of Scots still hesitate to ask – which seems odd, when portion sizes in many mid-market eateries are becoming as huge as those in the US. Perhaps the term ‘doggy bag’ – which started in the US as a way of saving money by taking uneaten food home to the dog – is at the root of the problem. According to my own straw poll of consumers, it connotes the dog-poop bag, and worse. Others were embarrassed to ask if their meal was hosted by someone else. Another said he didn’t know why he was too affronted, but put it down to the fact that eating out in Scotland is still regarded a novelty or privilege compared to America, and that it felt impolite to ask. None said they had been offered a takeaway service by their table server.

This is having a major impact on our behind-the-scenes food culture. Food waste collection has become lucrative, and so competitive that it could be described as dog-eat-dog.

In Edinburgh alone there are around half a dozen start-ups vying for business, seizing the opportunity handed to them by Edinburgh City Council when it stopped collecting commercial food waste three years ago and handed the Duty of Care back to restaurants, as it was now their legal responsibility to separate their waste and appoint a licensed waste carrier or face a hefty fine.

Such is the competition that Marion McColl, founder of Tartan Waste garbage collection based at Loanhead, is reluctant to reveal what she charges her clients.

“We’re always conscious of our competitors and we know of at least one large company which is after us,” she said. “If they get to know how much we charge our customers they will undercut us immediately and put us out of business.” Viridor, which works across Scotland, says it charges £8.60 per bin and Biffa quotes a general starting price of £7 a lift.

Anaerobic food recycling plants are also springing up. Millerhill in Midlothian is the newest, providing an alternative to Scottish Water’s Deerdykes site at Cumbernauld. Recycling centres charge waste collection companies around £50 plus VAT per tonne of food waste, including landfill tax – whose increase in April will no doubt be passed on to restaurants.

“Food waste collection is hard work as it’s heavy, messy and smelly, but we don’t mind,” said McColl, who founded Tartan Waste three years ago. It’s stressful too, as there are strictly-enforced set times for business food waste collection – and if food bins are left out in the street outwith these time slots they incur a fee. In certain city centre streets, collection is restricted to a one-hour window.

Actually, this law applies to all catering activities in Scotland that produce over 5kg food waste a week, following the introduction of Waste (Scotland) Regulations in January 2016. Legally they must recycle and dispose of their own food waste for separate collection in their own bins, or risk being fined up to £10,000.

The Scottish Food Waste Reduction Target, announced in 2016, of reducing food waste by 33% by 2025, is the first of its kind in Europe. It puts Scotland at the forefront of the UN Sustainable Development Goal of halving food waste by 2030. Wales has followed. Ms Cunningham said: “I suspect a lot of countries will be looking at food waste now.”

Ms Haglund said she has had contact from all over Europe including Italy and Spain from organisations keen to start up similar schemes to Good to Go. She was invited to speak about food waste at the first-ever Evolve sustainability conference in Lithuania.

From a restaurant’s point of view, Good to Go makes sense as it reduces the volume coming back to the kitchen to be dealt with – and paid for. Every full bin incurs a collection fee (and if it isn’t full it’s still charged at the full rate). So a medium-sized operation could be paying for, say, three bins to be collected four times a week. A conservative calculation of £7 per bin means a monthly bill of around £350-£400.

In some places the doggy bag has long been adopted as a pet project. Café Gandolfi in Glasgow and the Contini restaurant group in Edinburgh are among those whose staff have been offering the service for several years.

Two Fat Ladies at the Buttery, Mother India, Di Maggio’s, Tony Macaroni and the Ashoka Group in Glasgow have also joined in.

Ryan James, chair of Glasgow Restaurant Association, said: “It’s the mid-market restaurants like Italians and Indians that produce the greatest portions and the greatest food waste. That they have joined the Good To Go scheme is very positive indeed.

“Encouraging the offering and accepting of uneaten food is important, because it isn’t food that is actually waste. It’s food that can be eaten and shouldn’t be in the bin.”

But many establishments are not pro-active in this. Some have even refused when asked, thinking it was illegal and for fear of litigation if the diner becomes ill if the food has not been properly stored and reheated after before eating it at home.

What makes Good To Go different from the conventional doggy bag are the sticky labels which seal the leak-proof compostable boxes. These labels contain storage and reheating advice endorsed by Food Standards Scotland (FSS). Zero Waste Scotland collaborated with FSS on this to establish that the customer is provided with guidelines to follow, so the restaurant is relieved of responsibility for it.

“This is a first for the doggy bag and it is groundbreaking,” said Haglund. “It provides reassurance that it’s perfectly legal to offer food to take home. We hope it will break the vacuum between restaurants not offering, and people being embarrassed about having to ask.”

Roseanna Cunningham added: “It’s the formalisation of advice that people will find attractive.”

The cost for a pack of 300 boxes, bags and labels is £288, but the first batch is free as it’s funded by the European Development Fund and the Scottish Government.

Suzanne O’Connor of the Contini restaurant group has recently introduced Good to Go to the Scottish Café at the National Galleries of Scotland. It’s the labels, she says, that make the real difference. “The FSS advice has given staff and diners reassurance that it’s safe to take food home. As a result, they are more confident about the idea.

“Although we were giving take-home boxes before, this new advice has enabled us to go ahead without taking on the burden of worrying people are going to mistreat the food. The European symbols make it quite clear to visiting tourists too.”

She reckons that the cost of a box more or less balances out what she’s saving in food waste collection, and plans to roll it out across the group.

Only about 25% of plate waste reduction in the pilot scheme was taking food home: the rest was portion size reduction.

Seumas MacInnes, patron of Café Gandolfi, says the scheme has encouraged staff to look at what’s being returned to the kitchen and to consider reducing portion sizes or even encourage diners to order less food.

“Staff discuss diners’ orders at the table, and might suggest they’re ordering too much – though in a nice, polite way,” he said. “It doesn’t look good if it’s coming back so it’s better to chat to customers and take the risk of them ordering less.

“I think it’s about normalising our attitude to food waste.”

But won’t take-home boxes simply shift food waste from the restaurant to the home – in other words, transfer uneaten food from one waste system to another?

“We also asked that question,” said Haglund. “But we found that 92% of those who took food home ate it.

“And in some cases, restaurants actually managed to upsell because people ordered more food so they could enjoy it at home.”

So if it’s true that we’re finally boning up about doggy bags, there’s only one thing left to say.

Read it on The Herald Site