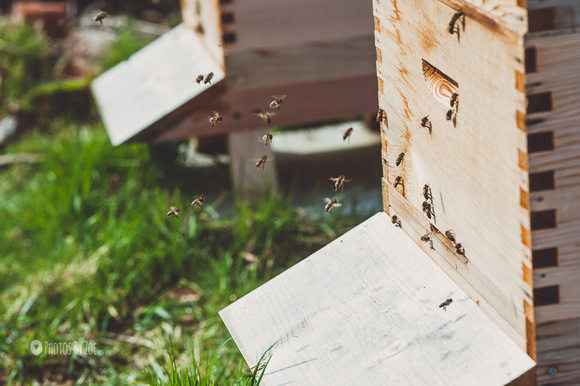 When Victor asked me in the spring of last year to help look after his bees at the Scottish Kitchen Garden, I was delighted. Victor and I first met several years ago at the beekeeping classes of the Edinburgh and Midlothian Beekeepers’ Association. A chance meeting at The Scottish Cafe & Restaurant when my mother and I were treating ourselves to a delicious lunch, began with the usual way beekeepers start a conversation: “How are you and how are your bees?”. Unfortunately, most of Victor’s bees had not survived the previous winter and with less time available to look after the remaining bees, Victor asked if I would be willing to give him a hand to manage his bees. Of course, I said, “yes!”.

During the summer of last year it was a real joy to visit the apiary in the Kitchen Garden and see the bees working away, pollinating the fruit and vegetable growing there. By the end of the summer Victor and I were able to harvest two supers of honey which is now available for sale in the Cannonball Restaurant and Contini George Street. Try some… it’s delicious! Victor has a second apiary in the grounds of the Scottish National Gallery of Modern Art, Modern One. Although none of the bees there had survive the winter of 2016/2017, we were both keen to reintroduce bees to this site. In July I caught a small swarm of bees near my own apiary at home and put these into a nucleus hive with Victor’s frames along with a frame feeder and some sugar syrup. Thankfully, the bees decided to stay. By the end of the summer the colony was large enough to use a full size beehive and we moved them to Modern One where they immediately indulged themselves on ivy pollen. Have the bees in the Scottish Kitchen Garden and Modern One survived our long and cold winter? Yes, they have indeed! When I visited the bees at Modern One in early April they were very busy bringing in pollen from the pussy willow, Salix caprea. This is a good sign that all is well with the honey bee colony and that the queen is laying again and subsequent visits have confirmed this. Over the next few weeks Victor and I will be checking the bees carefully to make sure they have enough to eat and enough space for the queen to lay. As the weather warms up a bit more, we’ll be adding supers above the brood boxes. This gives the bees more space to store the nectar which they bring into the hive and turn into honey. If we’re lucky, we may soon have some honey for all three Contini restaurants for you to enjoy!