Contini Edinburgh // About // Blog // Edinburgh, we love you… 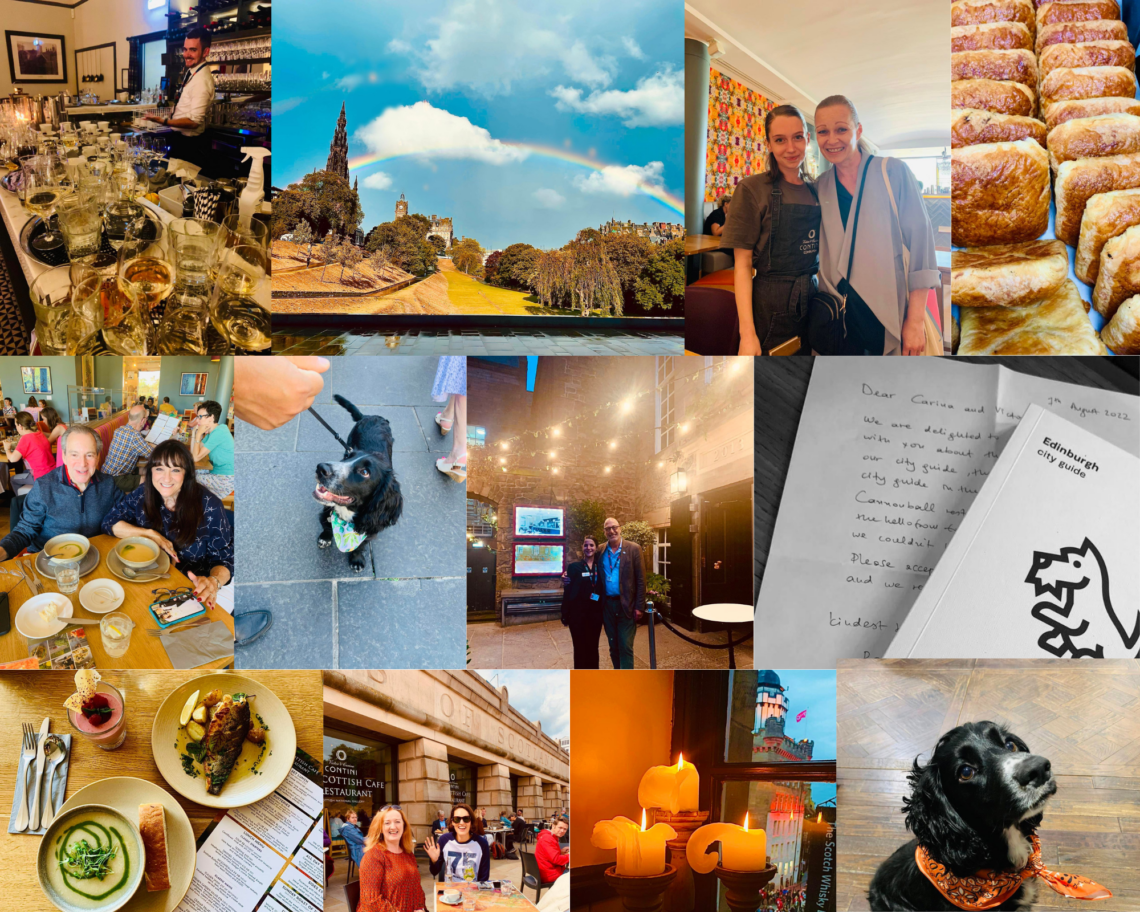 Edinburgh, we love you…

Edinburgh you are wonderful.  Especially the week before last when the sun was shining.  It’s been wet more recently but no this hasn’t dampened our spirits.  The 12 kilos of wool, worn by each piper on the Esplanade for the Tattoo, must have felt like 40 kilos in the rain, bless their cotton socks.  Almost 8000 audience and over 800 cast and the entourage of support head up to the Castle six days a week.  Marching right up to the top of the hill, have a wee jig and get marched back down again.  The cheers and clapping are contagious. It really is one of the best shows on earth.

The Edinburgh Festival has always felt like our best show time too for the restaurants.  Our business usually generates more over August than it does at Christmas. Being resourced and trained to deliver at this pace is a massive task for any business (even more so post Covid and Brexit).  Similar challenges will be felt for all our arts organisations and performers.

Our senior team is guiding and supporting a very young crew in comparison to previous years.  We’ve had a few small hiccups. Some due to the supply chain not keeping up; the broadband freezing as it’s unable to go fast enough with the pace or general fatigue kicking in but overall I feel our team have risen to the challenge and we are exceptionally proud of them all.

It is a team effort and whether you compare us to a pipe band or ballet company (congratulations Scottish Ballet on Coppelia, 5 star reviews everywhere, so looking forward to seeing this in the Autumn). It takes huge effort, stamina, loads of energy to keep going and keep smiling.    We’ve been hugely supported by the teams on the ground at National Galleries of Scotland, the Royal Edinburgh Tattoo and Essential Edinburgh with some of the logistics of pulling our performances together.  Our beautiful city truly is a special place to be, especially in August.   Any doubts that our Festivals wouldn’t bounce back have to be put into check.  Records may not have been broken this year, tickets seem to be available for almost everything, but the city has shown it knows how to deliver and it feels even more special than ever before. Next year can only be better.

We can’t do what we do without you beautiful people supporting all of us all and it is so greatly appreciated.  We’ve seen lots of cuddles, smiles, celebrity spotting and general giddiness.  Just what our souls need.  Sunshine has helped, it felt like Amalfi with all the sunglasses and shorts for the first few days.   This level of unbridled good cheer is my kind of crazy.    We even met a distant relative of Rocco who had come from Spain for his holidays.  “Oreo” looks like Rocco’s lost twin. A Covid after effect we’ve all gotten used to; far more four legged friends than ever trotting around the city.

Far fewer legs than expected in the audience for the FM’s Fringe show than for either Sir Keir Starmer or “ex Conservative PM candidate last round” Rory Stewart. If the Fringe was a Glasgow event this may not have been the case, or maybe some of the party’s most extreme fans were stuck in Perth cheering James Cook?  The possible Independence Referendum next year is looking like it should be rejected as the Scottish Parliament does not have the rights to hold the vote without the UK Government permission.  As there doesn’t seem to be a UK Government at the moment this seems the more pressing concern.

Water shortages were short lived with the thunder and downpours that we got last week. While farmers have been banned in the Borders from drawing water from the River Tweed from Friday. Elsewhere in the UK it’s looking dry with more hosepipe bans are being introduced. Given water companies have paid out £73bn to shareholders since privatisation and over 2.4billion litres of water has been lost every day through leaks, who is going to be bold enough to find a better solution for all our utilities (and keeping our rivers, seas and beaches as clean as they should be)?

More Brexit pain.  British travellers will have to pay a fee for entry to the EU from November next year. ETIAS (more like a pain in the ASS) will be 7Euros per person.  Forms to be completed.  How many 10 mins will be wasted on this one.  Not that many will be travelling with October energy bills soon to be landing on the doorstep. The EU price cap on gas is £37 per megawatt hour.  In the UK it’s £263.79 per megawatt per hour. Another Brexit bonus!  72% of families in Scotland are expected to be in fuel poverty in Scotland in January (and that’s with the heating turned down).  In London this is anticipated to be 56.4%, still very high considering how much milder the weather is, but this will be disproportionately affecting the poorest residents. The Scottish Government, if our UK Government wont, needs to do something as we’re not known for our tweeds, woolly jumpers, stovies and porridge for nothing.

UK trade with Japan (one of the bus promises, appearing on the bumper plate), has taken a bash.  The UK for many non European nations was a safe harbour to move into Europe.  With no influence or access to the mainland, these international firms have upped sticks and left, taking their money and trade with them.   Who is going to admit Brexit was a huge mistake?  One of the best lessons I learned from my big brother, I may have shared before, is, you can change your mind.  To continue along a path you know is leading to a dead end is a fool’s errand.  This isn’t like the Tattoo, one of the greatest shows on earth that takes you up to the top of the hill and takes you down again happier than when you started.  On Friday that was not quite as true as the city was in the middle of a bin strike.  A fringe show full of garbage that won’t be in any guide. Brexit is the greatest tragedy our nation has experienced and it’s leading us in a dreach and dreary direction.  With the lessons learned from Brexit is Independence a mirror none of us want to look in.  If the SNP was the party to get Britain back into Europe, like many of our English visitors I’ve spoken to from London to Newcastle, I’d vote for them.  (Based on the latest Ipsos poll, maybe the FM’s successor should rethink tactics!). While it’s not good to look back, if that’s where the sun is shining, ABOUT TURN.

Keep well and keep clapping for Edinburgh, it will keep your hands warm,